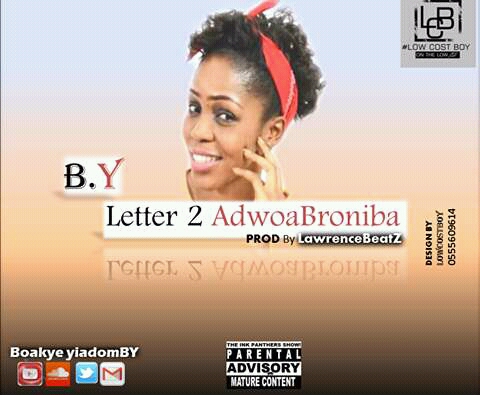 Damn!, its this real? Like seriously? BY writes a letter to broniba? Interesting.
Yeah, as real as Christiano Ronaldo’s team in Spain’s capital, Hell yeah!

Well in the first place, who is BY?

BY is an up and coming rapper with the full name Boakye Yiadom Frederick who is based in Konongo Lowcost, in the Ashanti  Region of Ghana.

Boakye Yiadom Frederick in an exclusive interview with Holykey1.com  said the song was a very deep song about a girl
named Adwoa Broniba who had a hold of his heart in a very special way. Like seriously? Hell yeah!
The boy is in love…..hehehehe

SEE ALSO : RAPPER BY GETS EMOTIONAL WITH FOLLOW YOU GO


We don’t want to say much
Just hit on the download button and enjoy for yourself….