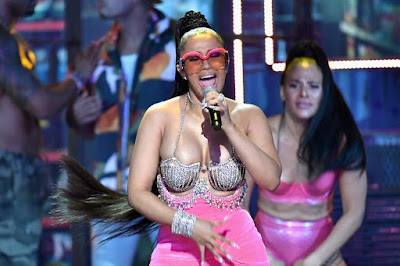 Cardi B and a host of A-list stars treated fans to an excellent concert.

Jay-Z’s third annual Tidal X benefit concert was one for the records books, attracting many big stars from the world of music to take the stage and perform in front of their fans. In addition to that, proceeds from the show went towards a good cause, this year benefiting hurricane relief in Texas, Florida and Puerto Rico, as well as earthquake relief in Mexico.

One of the most anticipated performances of the night was from Cardi B. By this point, any casual hip-hop fan who’s unfamiliar with her hit single “Bodak Yellow” has been severely out of the loop for too long. She’s rode the unprecedented rise to the top of Billboard’s Hot 100 in an honest kind of way, with many candid social media moments belying the fact that, at the end of it all, she’s just a New York City kid who’s made the most of her hustle and, now, it’s paying off in a big way. On Instagram, she called performing at the Tidal event a “dream come true.” Check out that post and a clip from her performance below.

I recorded Cardi B’s performance from #TidalXBrooklyn for y’all ? pic.twitter.com/gTdQjMNEGA

Chris Brown is another performer who graced the stage on Tuesday night, who is having no small amount of success in his own right this year. Clad in a yellow tracksuit with matching Nike’s on his feet, the vaunted R&B star sang several of his well-known tracks, including recent fare like “Party.” He’s expected to be dropping a 45-track project (!) in time for Halloweeen. Check out video footage of his performance below.

Fifth Harmony, who are coming off a memorable couple of singles as well as a statement showcase at this year’s MTV Video Music Awards, were part of the lineup too, performing some of their classics for adoring fans who packed the Barclay’s Center in Brooklyn and also tweeted along enthusiastically while watching the Tidal livestream at home. A snippet of their set can be seen below.

This is the best they’ve ever sounded. 5h did that #TIDALXBrooklyn pic.twitter.com/RmUj72pwiq

T.I., Iggy Azalea, Jennifer Lopez, Beyoncé, A$AP Ferg and a host of other hip-hop luminaries were all on hand at the star-studded event put on by Tidal and its promoters. In fact, the man behind Tidal, Jay-Z, took to the stage as well, ripping through both his new 4:44 material as well as some fan favorites that got big reactions from those in attendance. It was quite the show that helped raise a bunch of cash for those in need. Congrats to everyone involved in making the night such a spectacular one.

My phone died but it charged just in time for Jay Z #TIDALxBROOKLYN pic.twitter.com/0I3pR3K4Hg