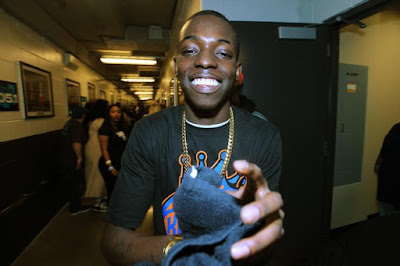 Jahlil Beats admits beat was initially made for Meek Mill.

Bobby Shmurda’s “Hot N***a” was the hottest record when it dropped. It was a monumental time for not only Shmurda’s success but for the sound that subsequently cultivated out of New York City. The song’s producer, Jahlil Beats, recently chopped it up with DJBooth where he revealed that the beat was supposed to be for Meek Mill.

While breaking down several of his most popular beats, Jahlil Beats ended up giving the story behind “Hot N***a.” He says that he initially made the beat for Meek Mill before handing it off to Lloyd Banks to use on “Jackpot.”

“That beat was actually for Meek Mill as well. At the time, he had so much of that type of music, so I sent it to Lloyd Banks. He put the record out and never really did nothing with it.” He said, “Nowadays, it’s like rappers put your record out and if it pops off, then they do the business side.”

Jahlil Beats admits that he did love what Lloyd Banks did with the beat but “Jackpot” never really had much commercial success. However, Bobby Shmurda and Rowdy Rebel were huge fans of what Meek & Jahlil work together and would often use similar beats to rap over. They later found the beat on one of Jahlil Beats’ Crack Music instrumental tapes and the rest was history.

“I put the instrumental out on one of my Crack Music instrumental tapes….He ended up doing the record and…it just blew up, man.” he said.

However, Jahlil Beats only found out about the song once it started going viral, much like the rest of us.

“The crazy thing about it is, I found out last. I didn’t know who he was at all. I saw people tagging me in it, in the video where he’s throwing the hat up and all that. And then my cousin sent me a tweet from Kevin Durant where he’s talking about it. That was when I knew it was big,” he said.

Jahlil later said that he reached out to him on Instagram after he found the song. Bobby later asked for his blessing which led to two to continue working. He says that prior to Bobby’s incarceration, the two of them worked on a few records together including some work for Jahlil’s album which will also include Rowdy Rebel.

“We got about five records that we had worked on before [Bobby] got locked up. His success was very short. He got locked up like a month after that record really blew up, so we didn’t get enough time to work together, ” he said.

The single ended up being Bobby Shmurda commercial debut on the Billboard 100 and peaked at #6 on the charts.