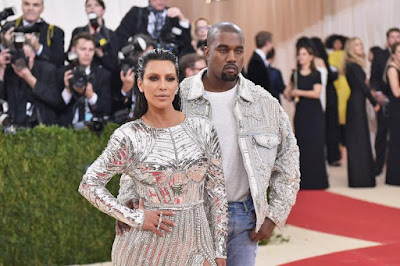 Kanye West and Kim Kardashian have been relatively low key lately. Well, at least comparison to before. Last year, Kanye West made headlines after he stormed the stage of one of his concerts. It was later revealed that Kim was the victim of a heist which led to Kanye’s abrupt exit. News broke earlier that someone broke onto their property and tried to rob them.

Kanye West and Kim Kardashian were hit up by a crook who busted into three of the couples luxurious vehicles, TMZ reports. In the report, they say the robbery went down around 4AM this morning at their Bel Air mansion. The suspect never entered the home but he did end up ransacking through a few of their vehicles. You’d think robbing a car owned by two of the biggest celebrities in the world would lead to having something worth robbing but it’s been reported he didn’t really get away with anything, except for an iPhone that doesn’t even belong to Kanye or Kim but one of their staff members.

The security guards at their home later chased the guy off the property. However, the security cameras managed to get a relatively clear shot of the perp.

The report also says he didn’t stop there. Later on, he tried to break into a car at Kathy Griffin’s place who lives next door to the Kardashian-West’s. Again, he didn’t really leave with much except for a purse. It seems that he was out of luck considering that the purse was ditched at a nearby location.

In other Kanye West and Kim Kardashian news, Kim recently confirmed that she’s delivering her third child. Considering the fact that rumors have been swirling for a while and the Kardashian life is one to be publicized, in a trailer for “Keeping Up With The Kardashians” she revealed to her sister, Khloe, that they’ll be having their third child. Prior to that, there wasn’t an actual confirmation from the couple but websites like TMZ  have reported on it through their sources.