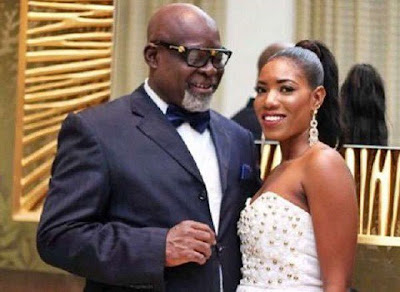 Actress Victoria Lebene Mekpah, who has been in the news for dating veteran actor Kofi Adjorlolo, has revealed in an exclusive interview with Peacefmonline.com that it is all over.

According to Victoria she has been going through a lot, especially with her family members, since her relationship with Kofi Adjorlolo became public, and she has now gotten to a point where she has to choose between her family and Kofi Adjorlolo.

Victoria said her father S.P Victor Mekpeh, a retired Chief Superintendent Officer of Ghana Prison Service has been against her relationship right from day one and had sworn never to give his blessing to their marriage.

She said she was happy with Kofi but her happiness would never be complete if her family, especially her father is not part of it.

She stressed that she was put in a very difficult situation to choose between the two men- her lover Kofi Adjorlolo and her father and she decided to choose family over love.

“I just think that I want to make it up to my father and the reason is that, he hasn’t been in agreement with the wedding and the whole marriage thing going on between me and Kofi Adjorlolo. It is something that has always been at the back of my mind that my father is not in support of it.

“So I have decided to make my father proud and to let him know that I have listened to him and I don’t want the marriage to come between me and my father because he is one of the reasons why I am who I am today”.

She also disclosed that the main reason why her father is against her romantic relationship with Mr. Adjorlolo is their age difference.

“He knows me better and my father has been like my first boyfriend so I think he wants me to get someone younger. He said he is not comfortable with Kofi definitely because he is much older than I am”.

Victoria however, insisted that this decision is her personal decision and not because of what people are saying or because of the things Counselor Lutterodt said about their supposed pending wedding.

Its just my father being the other case beside all the social media issues and I just want him to be happy because without your father’s blessing your marriage can’t flourish”.

She said Kofi Adjorlolo is aware that her father doesn’t approve of their relationship, adding that this is the reason why their much anticipated wedding has been hanging for sometime now but she wants to end it all and move on.

“That’s why the wedding has being hanging all this while and I know a lot of people were expecting to see whether we were going to get married or not but whichever way, they thought something was coming and I also thought that I could still buy some time and see if my father would change his mind but he is still not happy so I want to make him happy”.

SOURCE: BYGONEGH.COM
Thanks for visiting Holykey1.com, kindly come here often because we have more juicy entertainment stuff and sports for your pleasure
Don’t forget to leave your comments below and share this post to friends and family
STAY BLESSED!