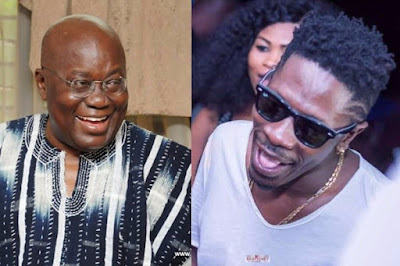 After a heartfelt ‘pidgin’ tweet from President Nana Akufo-Addo wishing Shatta Wale a happy birthday and asking him to visit him at the Flagstaff House, the dancehall artiste has responded to the invitation but with an anticipation for a Land Cruiser from the ‘father’ of the land.

A simple request from Shatta Wale to President Akufo-Addo on Twitter ahead of his 33rd birthday asking the present he had for him somewhat prompted an extension of invitation to the seat of government.

Overwhelmed by Akufo-Addo’s message, Shatta Wale replied thanking the President and indicated that he would honour his invitation.

Shatta Wale, in spite of his controversial and aggressive nature of tackling issues, has endeared himself to a lot of people from different age groups and statuses.

Having been in the music industry for more than 10 years, he launched a powerful comeback onto the music scene in 2014 when he released ‘Dancehall King.’

Since then, he has consistently released hit songs including, ‘Kakai,’ ‘Mahama Paper,’ ‘Ayoo’ and has performed on bigger platforms across the world.

Your excellency tuesday is my birthday ..what are you giving me ..@NAkufoAddo ???

Happy birthday @shattawalegh! You for come visit me for Flagstaff House o!

Happy birthday @shattawalegh! You for come visit me for Flagstaff House o!