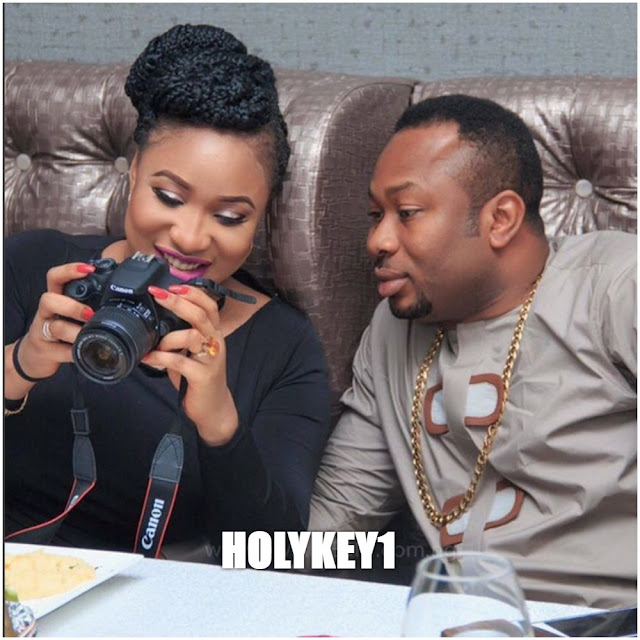 TontoDikeh’s estranged ex-hubby,Oladunni Churchill has opened up on his own side of the story. He granted his interview to Media hub, the same platform Tonto used to tell her story ..

According to Churchill, he never assaulted her and confirmed that his wife pulled a gun at his bodyguard in Ghana which resulted in her arrest. He claimed she went back to drugs after giving birth to their son…

He said 95 percent of her allegations against him are lies an the only truth she said was ‘she loves him’..

On the incident in Ghana, he said

“I picked her up from the airport just a day before- that was June 8, 2015. We had a misunderstanding and she decided to move to a hotel. She came the next morning- I was not even home; I sent her a text that I went to a friend’s house(Wunmi). I heard she came home around 3 [or] 4 and started breaking everything in the house. Luckily for me, I had switched off the electric fence wire before I left the house. So, she started from the electric fence. She pulled everything down. She jumped [into] my compound. She broke everything.

So, when I got home, I met the police – already, I called the police patrol. The closest police station there was Maigina Police Station. When I got home, she was already attacking the police people. They forced the door [in].
You know, there is this thing about my wife- it’s just like crisis. She doesn’t stop. She gets too temperamental due to negative energy [caused by] alcohol abuse, marijuana, anything that has something to do with drugs.
When her anger starts…she uses everything around her. When she is angry, even 6 men can’t stop her. The police couldn’t stop her. She destroyed everything. Even the police were surprised. She even spat on one of them.
That event, when it took place, I covered everything. I took everyone’s phone and deleted every picture. I closed everything in Ghana just because of her.

[But] in the last interview, she mentioned that she was beaten and ran to the embassy stark naked. As soon as I saw that [interview], I requested for my own statement [to the police].
To those people saying that I ‘sponsored [the police]: you can’t sponsor the Ghana Police.
After the incidence, she was locked up. I wrote a withdrawal letter. I bailed her. I told her to replace my properties, but I just decided to withdraw everything.
What she told me when I took her from the [jail] was “if you forgive me, that means you are an angel.” She promised never to go back to drugs or alcohol.”

Three weeks after the [police event], she took in. All the way, throughout 9 months, she was a perfect mother, till she came back from the United States with [our son] King. Till 4 months after she gave birth to King, she was perfect, [but then] she started [doing drugs] again.
I tried my best to revive her back to who she was when she was pregnant, or just immediately after she gave birth but that’s the major problem. I have tried.
I have somebody that monitors Tonto, that gives me updates on everything she does even when she tried to blackmail me, when she sent information. Even when she sent information about my manager in Abuja. She came to Ghana when we had an event- we weren’t talking then, that was after mum’s incident – I went to Ghana to cool off.

On Tonto Dikeh’s claim that he hit their son, King

How can I hit King? (He laughs) No, it’s not possible. King [was] not up to one year.
On the scars found on Tonto Diikeh’s body, which she accused him of
“The only scar I am aware of is the one on her leg. She was breaking stuff and it got to a point where she was coming towards me. Her [male] best friend was trying to hold her back; [he] was crying. She was crazy. She always broke everything – television, kitchen utensils, dispenser. She [had] done this in my house, up to 4 times. In 7-8 months I had lost over N36million, but this was my mum’s house.
So, her best friend was trying to hold her, but she was coming towards me. He was crying, [saying] “Tonto stop. What are you doing? What are you doing” She [thrust] her leg through the glass in the staircase. That’s where she got the cut from. Anything apart from that is not real at all.
And then he played the video from the scene, showing the damage Tonto allegedly caused. His mother could be heard speaking Yoruba, telling her son, “I am worried about your own life.”
On Tonto’s claim that she lost her 4-months pregnancy during a violent attack by him

“There was nothing like it. I met her 6 months before she conceived [and] she was pregnant for another 9 months. She travelled and she came back after 4 months and she was breastfeeding. And she just stopped breastfeeding like 3 weeks ago. So, where is the pregnancy from?I don’t understand.
This woman told me she was going to get everything to bring me down. She has a foundation and I have a foundation, too. I have someone in her camp that gives me all the updates [like] how she made all the scars in her body up. She called somebody to make up the scars.

She made up the scars on her body. The only [scar] was [from the incident] in my mum’s house. She cut herself.
I am not a woman-beater. I have never done that in my life and I will never do that. She is trying everything because she knows I run a foundation and she knows the kind of person I am, she knows that maybe this young man is trying to be someone in future. She has everything planned.
[Her interview] was 95% lie. The only truth was [when she said] “I loved my husband.”
On claims of infecting Tonto with STDs

Not [in] this millennium. The last time I heard STD was in secondary school. At this stage of my life – STD? She is just trying everything.
On claims she watched him make ‘every dime he has’

No, that’s not possible. I met her two-and-a-half years ago and I have been into real estate since I was 22. When I met her, I had 4 companies. Now, I have 6 companies.

Well that’s also his side of the story…..but trust Holykey1, your leading community in Entertainment and more to give you all the juice regarding this story as it unfold

Please leave your comments and share to friends and family
STAY BLESSED!