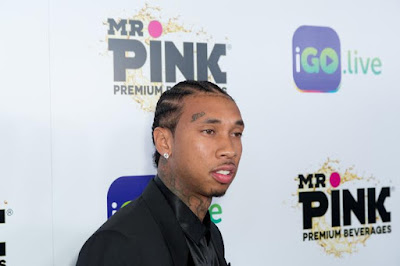 Earlier this summer, news broke that Tyga reportedly owed his former business associate from his Last Kings Clothing Brand, Chuon Guen Lee, $2 million after she won a lawsuit against him. He was being sued after he left their Last Kings clothing brand to open up another line of clothes under the name, Egypt Kings, with new business associate. The rapper has yet to pay her and she has since claimed that she hasn’t been able to get a hold of him. Today, TMZ is reporting that his former business associate says that he’s been hiding the money he owes her.

Lee is claiming that Tyga’s been hiding the money he owes her in shell companies, according to documents TMZ obtained. According to reports, Lee hasn’t been able to get a single dime from the rapper since winning the lawsuit she filed against him. The report says that Tyga’s been opening up a few other new companies to hide the profits he made from Last Kings. She’s claiming he makes about $450 thousand per month off of the brand. Lee’s says that the only reason he’s even opened up these companies is to hide the profits. Lee’s suing the rapper to get a full accounting of Tyga’s revenues from all the companies he’s opened and to void the transfer of money.

Tyga’s had other legal issues he’s dealt with recently. A few weeks prior, the rapper and his former management company reached a settlement after they sued Tyga for $4 million. They later agreed that Tyga would only pay $1.5 million and would be able to pay it in three separate installments of $250K within the first 10 days of the settlement, four separate payments of $137,500 and a final payment of $700,000 to be paid by June 2019.

Aside from this, it seems Tyga has been putting more focus into his music career. Throughout 2017, he’s been dropping a slew of singles, whether original songs or freestyles. In July, he dropped his mixtape Bitch I’m The Shit 2 and earlier in September, he teased a “singing album” which was shortly followed by his melodic single “Boss Up.” While he does have his legal woes he must deal with, he seems to be keeping himself preoccupied with music as well.