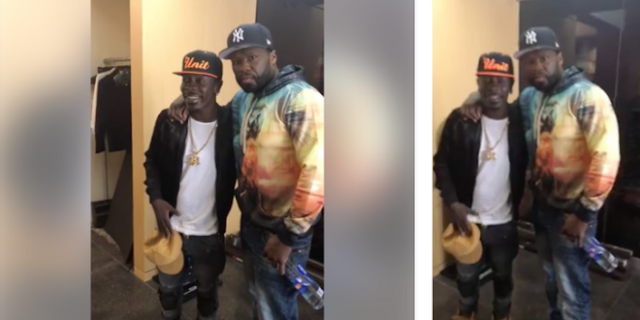 Amazing isnt it? Shatta Wale after disclosing he might just be dropping a G5 private Jet has surpised his followers and music lovers with a great meetin with American rapper Curtis Jackson aka 50 cents.

The multi award winning superstar who has been updating his followers of his journey through Facebook Live streams made a stop at 50 Cent’s This Is 50 outfit for an interview and took some few photos with the ‘Candy Shop’ rapper.

He was earlier seen in the premises of g-unit granting an interview and. Many people had said there was no way he was going to meet 50-cent and that it was just an interview, when he came live on facebook with the interview.
but now that, he’s seen taking pictures with the popular American rapper, 50 cent, could that mean there would be a collaboration?